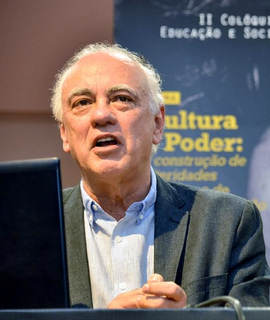 Manuel Jacinto Sarmento was born in 1955 and is an associate professor at the Education Institute of the University of Minho, Portugal. Has a PhD in Child Studies. Is an invited professor at several Brazilian and French universities. He is the current director of the Masters Course in Child Studies and was the director of the PhD program in Child Studies (2004-2011) and of the Social Sciences of Education Department at the University of Minho (2010-2013). Was a member of the Portuguese National Council of Education (2005-2009). Author and co-author of 16 books about childhood and education and more than one hundred scientific articles published in several languages. He has directed courses and seminars at several Portuguese, Brazilian and French universities. Director of the scientific journal Investigar em Educação of the Portuguese Education Sciences Society. Member of several international scientific associations, namely, of the International Sociological Association (ISA) and the Association International de Sociologues de Langue Française (AISLF). He is of the research committee of Sociologie de l’Enfance e of the direction of AISLF - (2009-2012). His most recent research areas are: childhood and public policies; the child in the city; childhood cultures and interculturality; child labour; education and the social status of students.