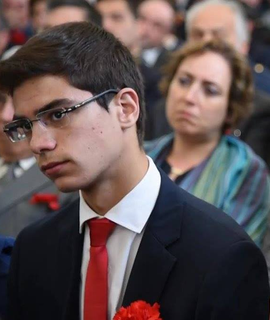 Born in Gaia, Rui Teixeira has currently 16 years old. At the age of 12, he participated in a European project, in colaboration with Eurochild association, in the fight against child poberty. He delivered in Brussels a petition to the European Union leaders to fight against this scourge and collaborated in Cyprus in the elaboration of a magazine about the same theme and the right to paticipation ("Speak Up!").

He's president of the Student's Association of Escola Secundária de Almeida Garrett since 2015. Participated in 2015 and 2016 on the Parlamento dos Jovens program, reaching in both participations the national phase in the Assembleia da República as one of the Porto's electoral circle representatives.