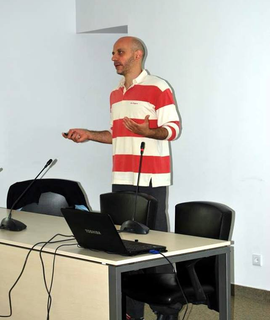 Giancarlo was born in Chieti, Italy, on the 14th of August 1972. He got a master degree in Astronomy, obtaines in 2001 in the University of Padua, with the mark 110/110, and a Ph.D in physics, obtained in 2005 in the University of Trieste. During his Ph.D. he worked in the European Southern Observaotry, in Garching, Germany, with a grant of the same institution. Then he went on researching in the field of stellar astrophysics funded by post-doc grants, in the University of Padua and in the Arcetri (Florence) Observatory, between 2004 and 2006, for the ARIES observatory, Nainital, India, in 2007, and in CAUP, Porto, with two FCT grants, from December 2007 to March 2015. After finishing his last project as professional astrophycist, Giancarlo Pace preferred to abandon the profession and become an amateur reasearcher on the teaching of physics and an activist. He is presently coordinating a projet built around this unusual combination, KEY 1.0, developed by "SOS racismo" and funded by "ciência viva" in the ambit of the call INTEGRA, science for inclusion.