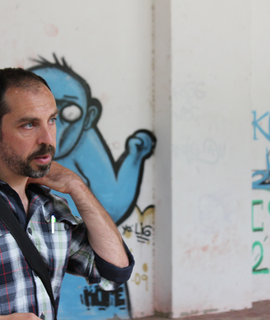 Ricardo Campos is a social scientist and illustrator, born and living in Lisbon (Portugal). He holds a Graduation and Master degree in Sociology and a PhD in Visual Anthropology. He is a researcher at CICS.Nova – Interdiciplinary Centre of Social Sciences, Portugal. In the past fifteen years, he has been researching urban youth cultures and, particularly, the connections between youth and image. Besides urban cultures, he has been studying and writing several articles and books -mainly in Portuguese- on topics such as visual methodologies, visual culture, art or education. His publications include “Porque pintamos a cidade? Uma abordagem etnográfica ao graffiti urbano” [Why do we paint the city? An ethnographic approach to urban graffiti] (Fim de Século, 2010) and “Introdução à Cultura Visual. Abordagens e metodologias” [Introduction to Visual Culture. Approaches and Methodologies] (Mundos Sociais, 2013). He has co-edited (with Andrea Mubi Brighenti and Luciano Spinelli) “Uma cidade de Imagens” [A city of images] (Mundos Sociais, 2011), Popular & Visual Culture: Design, Circulation and Consumption (with Clara Sarmento, Cambridge Scholars Publishing, 2014) and Transglobal Sounds. Music, indentity and migrant descendants, (with João Sardinha, Bloomsbury Academic Publishing, 2016).  He is also one of the editors of the Brazilian academic journal "Cadernos de Arte e Antropologia" [Journal of Art and Anthropology](https://cadernosaa.revues.org/) and co-coordinator of the Luso-Brasilian Network for the Study of Urban Arts and Interventions.(RAIU).